The authors explain how to perform statistical analysis using the SPSS program. At the same time, they present in a simple way the principles of statistics, important methodological aspects of data analysis and guide students through the options of SPSS of how to carry out the necessary calculations and outputs, both numerical and graphical. Apart from the theoretical insight, the textbook features practical advice, data files and tools for practical data analysis as well as exercises to practise the analysis. No similar textbook of data analysis in the social sciences has been published in the Czech Republic so far, it will thus be of benefit for both students and researchers in social sciences. 2nd revised edition.

In the fifth volume we reflect on the hybrid nature of the social and work environment in which most of us normally live. The boundaries between online and offline are blur­ring, both worlds merge into one. How will the ongoing technological revolution affect our education, professional success or value orientation? According to information science, the core of the answer lies in the way we obtain, evaluate and use information.

Darwinism claims to be a complete theory of biological life, including human life. It has a significant effect on the self-concept of contemporary humans and their worldview. In his unique book, Professor Emeritus of Masaryk University, physician and philosopher Jiří Vácha summarizes the current scientific critique of Darwinism, and also expands the whole problem by the notion of "consciousness" as the most specific feature of live beings. In addition to the evolving physical aspect of organisms, their experiential aspect has evolved too, and Darwinism does not take that sufficiently into account. Modern natural science, following in the footsteps of Descartes' mechanism, has a priori closed the door to this fundamental problem and has had to make way for philosophy and its interpretation. Despite its broad scientific scope, the book is surprisingly readable, the author explains complex things in clear and simple language. 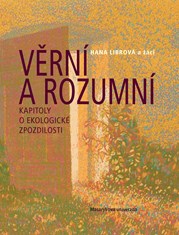 Hana Librová and her students: The Faithful and the Reasonable. Chapters on Ecological Backwardness

This book follows the successful titles “The Colourful and the Green: Chapters on Voluntary Simplicity” and “The Half-Hearted and the Hesitant: Chapters on Ecological Luxury.” The author poses the question of why, at a time of continuing devastation of nature, people’s interest in nature conservation has been decreasing. Are the media to blame or is our numbness toward ecological problems rooted in our mental makeup that tends to supress unpleasant realities? The author also wants to find out why some people have remained faithful to nature. To get to the answers, she applies sociological, philosophical, psychological, and theological perspectives. An unexpected question that may surprise some readers then becomes: Actually, why should we protect nature when it can take care of itself? It is not weak; it is strong and cruel.
Librová’s students Vojtěch Pelikán, Lucie Galčanová, and Lukáš Kala interview the children of “the Colourful,” too: have they inherited their parents’ modest lifestyle?

Those interested in the book have a unique opportunity to choose from two designs: publication with color linocuts by Miloš Sláma or with paintings by Bohdan Lacina.

This epic book celebrates the successes of professor Bařinka’s sixtyyear long career in plastic and reconstructive surgery. On almost 900 pages, it presents the long years of experience of the Brno plasticsurgery school in which the author has played a substantive role. The main asset of the publication is a huge number of meticulously compiled patients’ case histories which virtually encompass the whole discipline. The book is divided into eleven chapters organised according to individual areas of interest of the field. In selected topics (such as the auricle reconstruction or lower extremities lymphedema), the book strives for significant deepening of the readers’ knowledge. It is the most extensive monograph in the field of plastic surgery ever published in the Czech Republic.

In late 1957, Czech archaeologist and art historian Lumír Jisl set off for a business trip to Mongolia and China. He was keeping a detailed personal diary throughout his six-month journey where he openly and critically captured the atmosphere of Chinese everyday life. Above all, he vividly portrayed diverse Buddhist and other temples, rock and cave sacral complexes, and other significant monuments of Chinese history. He supplemented his records with colour and black and white photographs. The manuscript of the diary was preserved along with the negatives in the family archive and could not be published until now.

Apart from the diary itself, the book contains rich visual accompaniment, several memories of Jisl’s contemporaries, and specialised religionist and sinologist studies. A detailed index, cartographic attachment, and extensive footnotes are naturally not missing.

Gemstones are masterpieces of nature, and their mysterious sparkle has fascinated man from time immemorial. The representative publication conveys the history of precious stones, as well as history as such. Gemstones on its 382 pages, in 332 photographs and 50 illustrations reveal to us the life and problems of ancient civilizations. The compelling text and extensive visual material draw readers directly into the long gone times which they discover step by step thanks to the systematic documentation of archaeological finds – artefacts made of precious stones.

The book is unique in its scope; it presents a summary of the existing knowledge about the subject. It will be of use to experts on various ancient civilizations and those interested in mineralogy and archaeology, but it will also certainly impress any lover of beauty, history and precious stones.

The grandiose encyclopaedic trilogy is based on the interconnection of musical, verbal, and also visual arts. It contains over two thousand entries with the personalities of composers, in whose work has music at least once met with literature – from mere documentable inspiration to setting a literary work into music. The dictionary is the result of impressive, decades-long author's work.

Elena Marečková-Štolcová a kolektiv: Latinitas medica. A lexicon of (not only) medical sentences, quotations and phrases

Latinitas medica is a voluminous compendium presenting nearly 7,000 sentences, quotations, phrases, and technical terms formulated throughout centuries in Latin language. Primarily, the spheres of human health and medicine have been focused on but other natural sciences (e. g. pharmacy) and the adherent spheres of philosophy as well as religion, psychology, ethics, pedagogy, sociology and law have been integrated. The items, both the texts written by well-known authorities and anonymous pieces of folk wisdom, appear in their original (Latin) version as accompanied by their brand-new Czech translation and occasional commentaries and references. Thanks to the alphabetic order and the two comprehensive keyword catalogues (Latin and Czech) the inner structure of the comprehensive volume discussed appears lucid and the book itself proofs user-friendly.

Marek Fencl, born in Hodonín in 1967, graduated from the Faculty of Medicine of Masaryk University and works in Brno as a doctor. He published his verses in the literary review Weles and in several collections of poems. His first individual collection contains 45 poems written in a free verse, full of pictures of landscape and life in Moravian Slovakia. The land there is cultivated from ancient times, among other things by the demanding cultivation of grapevine, is in itself such a vineyard of the Lord with the symbolism that belongs to it. It gives people bread not only for food, but also food for the spirit.

“Communist Law in Czechoslovakia” is a unique project born out of intellectual discomfort of the editors of this collective volume. The discomfort was caused by what was perceived as a lack of as good as any critical analysis of what communist law was and how it still considerably shapes the law in contemporary Czech Republic and Slovakia. The collective volume has the ambition of launching the long needed debate on this subject.

Field didactics are scientific disciplines that focus on the domain-specific dimension of teaching and learning in and outside the school environment. They deal with a range of issues, from defining and justifying the aims of teaching and learning in the specific field/subject to legitimation and didactic transformation of content and to methodical structuring of learning processes. A general issue in the Czech educational system is the fact that field didactics have not been systematically developed with adequate demand for a long period of time. Despite this, they have grown into relatively independent scientific disciplines (as evident in this book). The publication aims to give an overview of the development and state of the art of field didactics in the Czech Republic and discuss the prospects for their future.

“Poème électronique” was one of the first comprehensive multimedia works, which consistently used the handling of audio material in architectural space. This work was prepared by a trio of artists Le Corbusier, Edgard Varèse and Iannis Xenakis for the presentation of the Philips company at the World Exhibition in Brussels in 1958. Poème électronique is used in this book as a comprehensive term for a set of artistic acts associated with the Philips pavillion. A particular emphasis is placed on the personality of the solitaire and pioneer of electroacoustic music, Edgard Varèse. The present publication attempts to trace the lines of the development of the three main protagonists intersecting an interpretive framework designed by the aesthetics of contemporary art groups and movements.